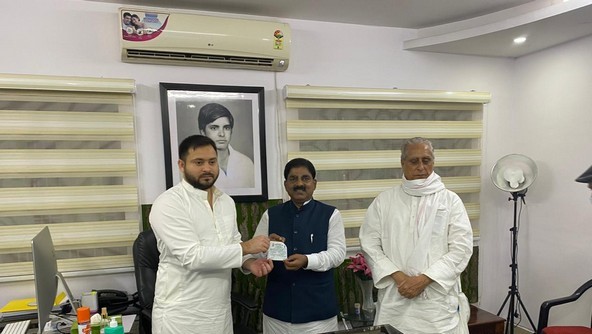 Chaudhary who was made the state RLSP president only in October last year joined the RJD in the presence of Tejashwi Yadav and Jagadanand Singh today.

Chaudhary crossed over to the RJD days after national party president Upendra Kushwaha announced his party would stay with the Grand Alliance only if the RJD replaces Tejashwi with someone else.

Currently, Kushwaha finds himself nowhere as none is taking note of the man. Reports said after breaking alliance with the RJD, Kushwaha had been in touch with the BJP but the latter is offering him a maximum of five seats while he was demanding 20 plus seats from the RJD.

For the past few days, he had been staying in Delhi trying hard for honourable seat bargain with the BJP but he failed to get desired response.

Finally, he returned to Patna today only to find that his state party unit had got “headless”. A large number of RLSP leaders have deserted the party right since he walked out of the NDA in December 2018.