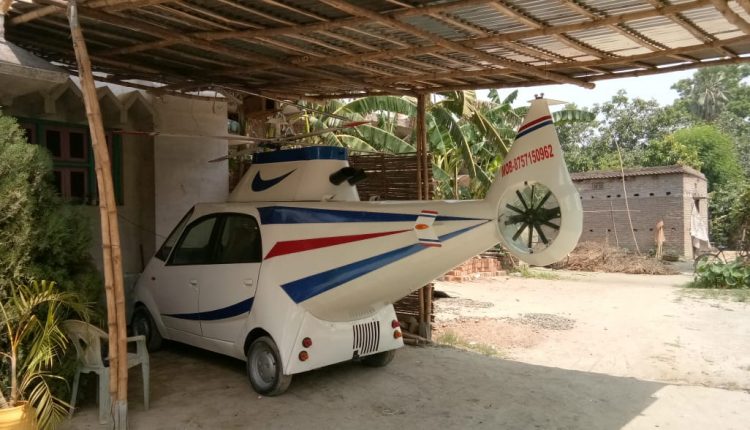 PATNA, INDIA: Two brothers from Indian state of Bihar have come out with a unique invention: they have converted a second hand car into a helicopter!

The helicopter car is now drawing hordes of local villagers every day at Sharmi village in Bihar’s Saran district, some 80 KM north of Patna, from where the brothers belong.

Although the car can’t fly like chopper yet interior of the second hand Tata Nano car gives a feel of helicopter ride.

The car has rotor blade, a tail, tail boom and a rotor mast quite like helicopter and whenever it walks on the roads, it attracts crowds of curious villagers who want to get selfies with chopper car.

Even more interesting is the reason behind the invention of the car. As such, the poor brothers wanted to become pilots but their dream remained unfulfilled owing to poor financial condition of the family.

“We wanted to become pilots and fly planes but our dream remained unfulfilled. So we decided to partially achieve our dream by making helicopter car. Now we are very happy,” said Mithilesh Prasad who along with his brother Sujeet Kumar has designed this chopper car.

Both the brothers are daily wage earners, working as pipeline fitters but spent Rs700,000 ($9,790.20) to convert the car into helicopter. They achieved this task after seven months of constant works.

17 killed in lightning strike in Bihar

‘If you have of much of problems,…

News Analysis: Nitish government on its…