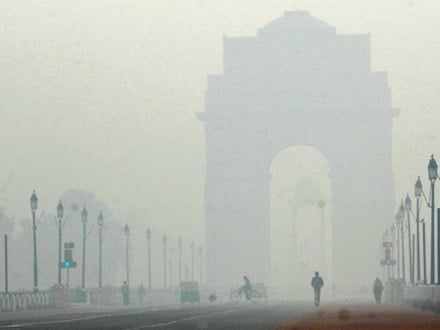 New York: Amid reports that air pollution in India’s capital, Delhi, has hit record highs over the past week, the United Nations Children’s Fund (UNICEF) has called on all countries to pay attention this emblematic case and take decisive actions to tackle the issue.

“With every breath, children in Delhi are suffering,” said UNICEF in a news release on Thursday, pointing to reports that air pollution in one of its neighbourhoods hit 999 micrograms of particulate matter per cubic meter (compared to an average of between 150-350 in January 2016).

According to the UN World Health Organization (WHO), there is a close, quantitative relationship between exposure to high concentrations of small particulates (PM10 and PM2.5) and increased mortality or morbidity, both daily and over time. This type of pollution has health impacts even at very low concentrations and no threshold has been identified below which no damage to health is observed.

On the air pollution in Delhi, UNICEF said that an estimated 4.41 million children in the city missed three days of school, earlier this week, following a decision to close its 5,798 schools to minimize the risk for children to be exposed to the polluted air.

It further said that this is not just challenge in Indian capital, numerous other cities in the country, such as Varanasi and Lucknow, as well as elsewhere in the world such as London, Beijing, Mexico City, Los Angeles and Manila have exceeded international guidelines – in some cases by considerable margin.

Recent analysis by the agency has shown that, globally, 300 million children live in areas with the most toxic levels of outdoor air pollution – exceeding six times international guidelines.

Despite progress, hundreds of children still die of measles every day: UN-backed report