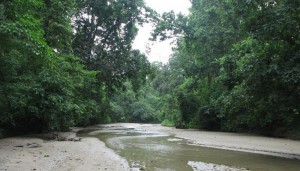 PATNA: Wildlife at the Valmiki Tiger Reserve (VTR) in Bihar has come under threat with the swirling Gandak reportedly inundating a vast part of the reserve.

The floodwaters entered the VTR region after heavy discharge of water in the river broke one of the gates of the Gandak barrage on Thursday night.

Reports appearing in local media said that the authorities were concerned at the fate of the wildlife species now with the floodwaters entering the region.

Authorities say forest ranges like Valmikinagar and Madanpur were the most affected with both these ranges located on the river bank.

Both these ranges and a high concentration of tigers and their prey base, officials said.

“We are concerned at the fate of VTR’s wildlife species as small animals might get washed away by floodwater,” a senior VTR official Amit Kumar was quoted as saying in English daily Hindustan Times today.

According to him, a red alert has been sounded in the areas.

“We have sent out a red alert in flood prone areas like Valmikinagar and Madanpur. Patrolling teams too have been directed to increase the round,” the official added.

Keeping in view the seriousness of the situation, the VTR authorities have arranged for boats and rafts to rescue the wildlife species.

According to a latest report on tiger population in India, VTR has currently 28 tigers

VTR, one of the nature’s virgin recesses in east India, comprises Valmiki National Park and Valmiki Wildlife Sanctuary. The VTR forest area covers 901.07 sq km which is 17.4% of the total geographical area of the district West Champaran

The total forest area comprises of about 901 sq km, out of which expanse of Valmiki Wildlife Sanctuary is 880.78 sq km and spread of the National Park is about 335.64 sq km.

In north, the protected areas are bordered by Nepal while the Indian state Uttar Pradesh bounds the Wildlife Sanctuary from the western side.

Indian official in a fix as Maulvi appeals to counsel his ‘beard-hater’ young wife!