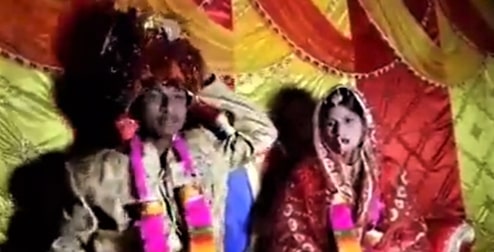 PATNA—Amid the Bihar government launching intensive campaigns against the continuing practice of dowry marriages, a video of the groom brazenly demanding dowry at the time of his wedding has gone viral, drawing wide protests from the masses online.

The man is heard repeatedly justifying his dowry demands on camera and even threatens to bring back his wedding procession if his demands were not fulfilled then and there even though asking for dowry remains a punishable offence in India. The incident took place at Chappalpur village located somewhere in north Bihar.

In the undated video, the crown-wearing groom seated beside the bride apparently during the garland-exchange ceremony is heard saying that he was promised hefty cash and gold jewelries as dowry but his would-be father-in-law didn’t fulfill the promise.

“Rs100,000 in cash, a gold chain and a gold ring are still due. I want all these things right now if the wedding has to be solemnized. I will go back with the wedding procession if my dowry demands are not met,” threatens the groom who is a government servant and son of a teacher.

According to the groom, he had already alerted the bride’s family to make arrangements for the remaining dowry items not paid before leaving home for the wedding and at that he was told that everything was ready but on reaching here, they are making various excuses.

He even states that if the would-be in-laws were not in a position to meet the dowry demands, they should have found someone to suit their status. “Why aim for people with a government job as a groom?” he mocks.

To which the bride sitting beside him counters the groom saying her parents had given him almost everything promised as dowry. “Only Rs100,000 is left and that amount will be paid soon,” the bride says.

The groom instantly intervenes and says “a gold chain and a gold ring have also not been paid”. When the bride says, these items will be paid right during the solemnization of wedding rituals, the groom wants them instantly.

“(I) won’t wait for the future for these dowry items to be given. I want them only now and here lest I will go back home with the wedding procession without completing the wedding rituals,” the groom threatens.

The incident has triggered massive protests Online with the Twitteratis reacting angrily and seeking legal action against the dowry-seeking groom whose father incidentally is a school teacher.

“Must log a police complaint against the man and he don’t deserve the girl,” reacted Tanmoy Ghosh. Another one reacted, “Ask the bride to punch on his nose and beat in front of entire public and then hand him over to police. Now that she have the video proving dowry demand. Also if this parasite is actually a government servant, his job should be revoked.”

Another Twitterati identified as Bharati Muralidhar comments, “..feel sorry for the girl besides who’s getting humiliated for not fault of hers…the fellow looks unsteady..better if it’s called off.”

The brazen demand for dowry by a government servant comes amid the Bihar government headed by chief minister Nitish Kumar launching vigorous campaigns against dowry and child marriages during its Samaj Sudhar Yatra, two socials plaguing the Indian society, for the past three months across the state.

In his address, he has been advising the masses to attend the weddings of only those persons who have not taken dowry.

Grand welcome, celebrations after girl is born in this Bihar family