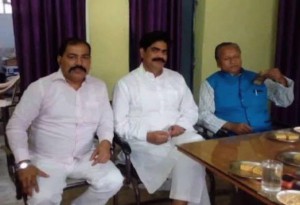 PATNA: It’s a tale of two jailors in Bihar: One accused of arranging the feast of a minister from Lalu Prasad’s RJD with mighty politician Mohammad Shahabuddin inside Siwan jail and another caught on camera sexually abusing a teenaged girl in Kishanganj jail. Strangely while the Kishanganj jail official has been arrested for his crime, his Siwan colleague goes unpunished, raising opposition’s eyebrows.

Let’s begin with the first incident reported in the second week of this month. Here in this case, the jailor came under attack after the minority affairs minister in the Nitish Kumar government Abdul Ghafoor was caught on camera feasting with the murder convict Mohammad Shahabuddin in jail.

The incident led to angry protests in the Bihar assembly last week as the furious opposition disrupted the House proceedings and forced frequent House adjournments, seeking action against the minister and the official concerned. However, both go unpunished till date.

Opposition alleged the chief minister sought to wash his hands off the entire controversy by simply ordering an investigation into this case.

“The minister is attending the ‘Junta Durbar’ being held in jail by a murder convict which is a very serious matter. The chief minister should now ask the minister to resign on his own or sack him if he refuses to do so,” asked opposition leader Prem Kumar, wondering over government’s mysterious silence over the issue.

He also sought to highlight how the minister’s meeting with a murder convict in jail had very much exposed the ‘good governance’ claim of the chief minister even as the defiant minister was quoted as saying in the media that he would meet further with the jailed Shahabuddin as and when the situation warranted. The minister also described it as a ‘courtesy meeting’.

In the second case involving the alleged sexual abuse of a minor girl by the Kishanganj jailor Kripashnakar Pandey, the state government has been rather quicker to initiate action. The jailor was caught on camera tightly hugging the daughter of jail’s material supplier in his arms and becoming intimate with the minor girl inside the jail premises. Last year, the jailor was accused of forcing female prisoners to have sex with him.

He was soon arrested and also placed under suspension. Subsequently, he was shifted to the Bhagalpur central jail after he was again caught on camera enjoying comfort in police custody. Apart from this, the government also suspended the police inspector who had allowed the accused jailor enjoy comfort in custody.

“It’s really strange. While the Kishanganj jailor has been arrested and sent to jail for his crime, the Siwan jailor goes unpunished. Does Siwan jailor enjoy the patronage of Lalu Prasad?” asked senior BJP leader Sushil Kumar Modi, raising questions over the government’s intention.

Well, the tale of two jailors remains quite intriguing…