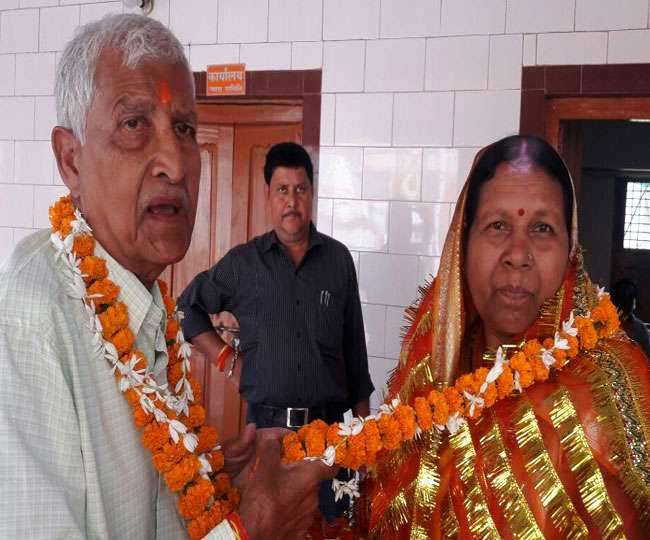 PATNA: She waited 47 years for love. And now, 60-year-old Shugan Sanga has married Baidyanath Prasad Singh, 75, the man she waited for all these years.

The wedding took place at a local temple on Friday in Vaishali district, some 25 km north of Patna, in the Indian state of Bihar.

Sanga’s life took a different turn once Baidyanath Prasad Singh, a government official, moved to her house as a tenant after his first posting in Jharkhand in 1971. She took care of Singh’s two little children as his wife remained sick on most of the time.

She became close to Singh and accepted him as her “husband” but she never expressed her wish for marriage since his first wife was alive. Singh was absorbed by her selfless service – she looked after his children as her own and remained unmarried.

“I am very, very happy with this marriage. From the very beginning, I accepted this family as my own family and looked after his children as my own,” Sanga said. All Singh’s family members, including grandchildren, attended the wedding and looked happy.

The marriage took place barely two months after Singh’s first wife died after a prolonged illness. It was Singh’s grown-up children who convinced him to marry the woman who had brought them up and never complained about her own troubles. Singh’s the younger son, Pravin Kumar, a school teacher, went all out to unite the two.

“I was quite worried what would happen to Sanga after my death since she had not married. She spent her time looking after my family. So I decided to marry her,” Singh explained. He said the woman had been taking care of his children since 1971 as his first wife was sick.

He also transferred landed property in her name so that she doesn’t face any trouble in her life.

Singh, who retired from service some 15 years ago, is currently staying in his native village in Vaishali district.