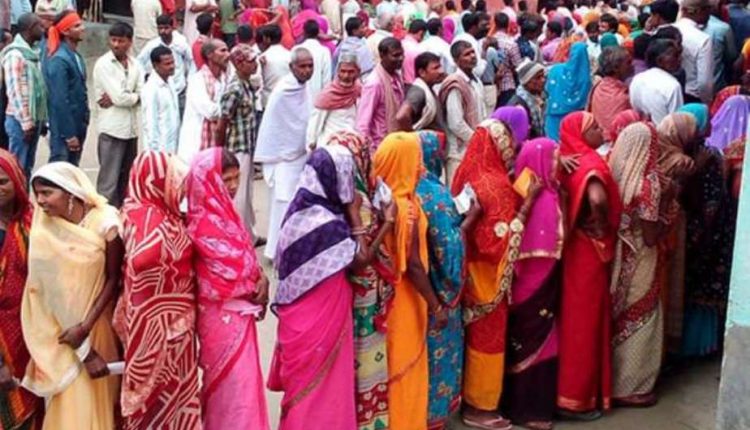 Voters lining up at a polling booth to cast their votes during third phase of polling in Bihar on Tuesday IMAGE COURTESY: JAGRAN.COM
260
Share

PATNA: An estimated 60 percent voters cast their votes in the third phase as polling in five Lok sabha constituencies of Bihar passed off peacefully on Tuesday.

Election Commission officials said a maximum of 62.80 percent polling was reported from both Supaul, followed by 62.34 percent in Araria, 59.12 percent in Madhepura, 58.83 percent in Khagaria and 56.92 in Jhanjharpur. Polling on all seats passed off peacefully.

In the third phase, stakes are high for the opposition Grand Alliance as three of the five constituencies are currently held by the RJD and the Congress while rest by the NDA.

In the last LS polls, RJD had won the Araria and Madhepura seats while the Congress had emerged victorious from the Supaul seat. On the other hand, the NDA had won the Khagaria and Jhanjharpur seats. But this time, the situation looks different for the opposition Grand Alliance.

What has caused problem for the opposition alliance is the entry of sitting MP Pappu Yadav as rebel candidate in Madhepura poll fray. Pappu is contesting against official RJD candidate Sharad Yadav whom he had defeated in the last election as RJD candidate.

His presence in the poll fray not only threatens the split in the RJD’s base votes but also has caused animosity in the Grand Alliance. Reports said the RJD is not wholeheartedly supporting the Congress candidate from Supaul seat Ranjita Ranjan, wife of Pappu Yadav, in protest.

The prevailing bitterness is underlined from the fact that the RJD leader Tejashwi Yadav hasn’t joined any election rally of Congress chief Rahul Gandhi in Bihar so far. On Sunday as well Tejashwi skipped Gandhi’s rally that he addressed in Supaul in favour of Congress candidate. However, Tejashwi dscribes it as a part of his strategy.

Likewise, it is being described as an acid test for the RJD candidate in Araria. In the last LS polls, then RJD candidate Mohammad Taslimuddin had won the seat with over 1.46 lakh votes but post his sudden demise in 2017, his son Sarfaraz Alam now faces the challenge to retain it.

Although he won the by-election to this seat last year but the experts credited his victory more to the sympathy wave than his personal charisma.

Similarly, the RJD candidate Gulab Yadav faces challenge in Jharjharpur seat where the contest is triangular while in Khagaria, the fisherman leader Mukesh Sahni is fighting his maiden election of his barely four month-old political career as a Grand Alliance candidate. Sahni who is contesting on the ticket of his newly-floated party, Vikasseel Insan Party (VIP) faces stiff challenge from sitting LJP parliamentarian Mehboob Ali Kaisar in the poll fray.

Fisherman community people are scattered in many constituencies of north Bihar in good number and that helped the VIP get three seats under the seat-sharing deal. It will be charisma of sort if the VIP is able to open its account in the elections given the fact that the party is just few month old and has no experience to contest elections in the past.

Poll result prediction in India not an easy game, so just enjoy the democratic process!