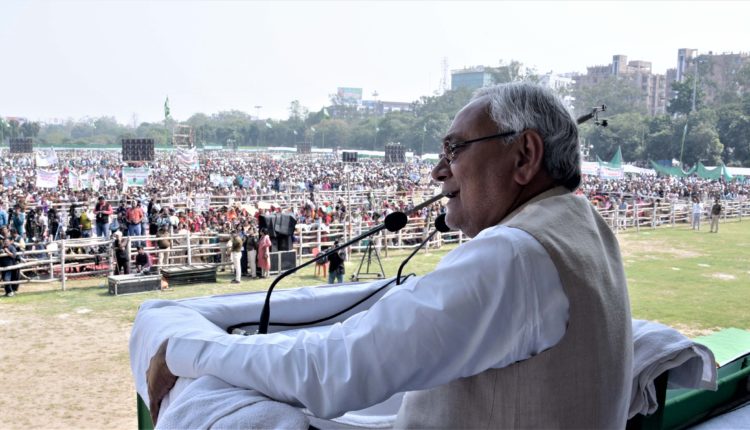 PATNA—Bihar chief minister Nitish Kumar routinely talks about having established a “Rule of law”, maintaining state’s double-digit growth and launching a number of projects for the state yet it’s very ironical to find the great politician still setting his eyes on RJD’s proverbial “jungle Raj” to make political gains in the next assembly elections despite being in power for 15 years!

That is what appeared to be the “election strategy” of the chief minister for the upcoming Bihar assembly elections scheduled later this year. The chief minister also incidentally happens to be the national president of Janata Dal United (JD-U) which is currently a part of the NDA in Bihar, and allied to the BJP and the Lok Janshkti Party (LJP) of Dalit politician Ram Vilas Paswan.

The chief minister had organised a mega workers’ conference at the sprawling Gandhi Maidan in Patna on Sunday coinciding with his 69th birthday to make the party workers aware about his election strategy in view of the upcoming state polls.

Obviously, the meeting was of much interest for the JD-U workers and they attended the venue in impressive numbers to hear their leader revealing the “victory formula”. They, however, got hugely surprised when the chief minister kept harping on his predecessor RJD’s “Jungle Raj” and then comparing his government with the RJD rule, instead of any developed state in the country.

From the dais, he rattled out statistics to show how incidents of crime has “come down” in the NDA regime, number of patients at government hospitals has increased, roads have become smooth, academic situation has improved and how calling Bihari is no longer remains a “shame”.

He also claimed 23.27crores people have been benefitted from the Right to Public Service Act (RTPS) and lakhs from the state government’s Bihar Public Grievance Redressal Rule Act. He then rattled out figures to show how the number of girls appearing at matriculation examinations has become equal to the boys, the state has become free from polio, kalazar or black fever cases have come down and also reproduction ate has showed a decline.

In between these achievements, the chief minister repeatedly walked into the RJD’s 15-year-old regime to remind the masses about the “Jungle Raj” and “collapse of the system”.

Political experts now wonder over Nitish Kumar ’s frantic attempts to still depend heavily on the “failures” of the previous RJD government to make political gains despite having completed 15 years in power. They said both the regimes just can’t be compared.

“During the 90’s when the RJD was in power, it was the social empowerment that mattered the most but now that this has been very much achieved it is the “economic empowerment” that matters now. It is funny to see Nitish Kumar still comparing his government with that of 15 year-old regime of the RJD,” commented a political expert.

“Nitish Kumar must know that he too has completed 15 years in power and the mere comparison of his government with that of RJD regime won’t work anymore. The common masses have forgotten the RJD regime long back and want job, growth, social welfare and economic empowerment,” he explained.